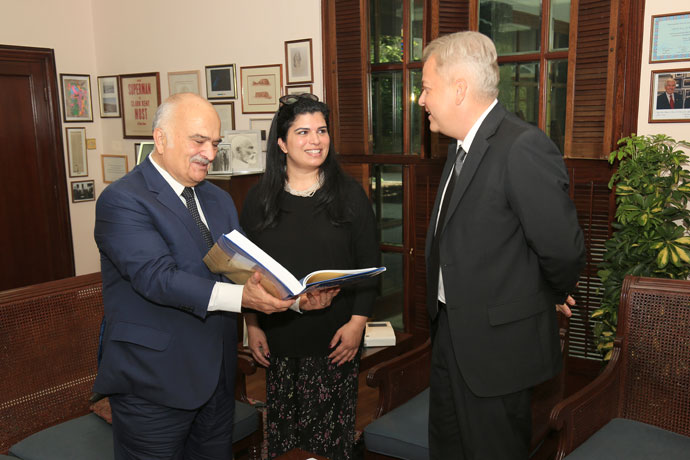 Josephus, the official Roman historian of the first century Imperial Flavian Dynasty gave a detailed report on “John that was called the Baptist: for Herod slew him […] he was sent a prisoner, out of Herod’s suspicious temper, to Machaerus, the castle I before mentioned, and was there put to death” (Antiquitates Judaicae XVIII 5,2). The historical fact of John’s imprisonment is attested by all the Gospels, and their accounts are consistent with and complement that of Josephus. The fortified Biblical citadel and city of Machaerus in the Trans Dead Sea area was destroyed by the Legion X Fretensis of the Flavian Emperor Vespasian in 71 AD, and later turned into oblivion. Furthermore, the Church History of Eusebius in ca. 324 confirmed Machaerus, as the authentic scene of the imprisonment and beheading of the Baptist (Ecclesiastical History I. 11. 4-6), however the exact location of the historical place had been lost.

HRH Prince El-Hassan bin Talal, Founder and Chairman of the Royal Scientific Society of Jordan, commemorated the historical place of Machaerus with the following words: “The evocative Citadel of Mukawir, or Machaerus to the ancient world, is a site that is redolent with the narrative and wonder of history and faith. It is one of those very special places that seem to exist beyond time and in its own space. It sits in a deeply imbued landscape that brings to life the resting chronicle of belief, devotion and struggle. This abandoned hilltop site with its faded but once-magnificent fortified royal palace, occupies a strategic point overlooking the Dead Sea in the modern Hashemite Kingdom of Jordan. […] This story of death for faith and for love of an ideal makes Mukawir so much more than a fascinating archaeological site. It sits in the landscape of religious memory as a testament and place of pilgrimage, not only for Muslims, but for Christians too. In our country, our beloved Prophet Yehya is Saint John the Baptist by another name. He is the valiant predecessor of Jesus Christ and, indeed, he is rightly considered to be the Patron Saint of Jordan.”

It was on 17 January 1807, after 1735 “lost years” since the 71 AD Roman siege and final destruction of Machaerus, when the German Ulrich Jasper Seetzen arrived to the little Muslim hamlet of Mukawir near the Dead Sea, and the name reminded him for the ancient Greek word of “Machairos” (meaning “sword”, i.e. Lat. Machaerus, It. Macheronte). At the border of the little village he discovered an isolated hilltop, overlooking the Dead Sea, which geographical place and geomorphological formation properly fitted the ancient descriptions of Strabo, Pliny the Elder and especially Josephus, concerning the Hasmonean-Herodian royal castle of Machaerus. The limited surface ruins and the visible geographical evidences met the first century literary references. A hypothesis was born with the possible identification of ancient Machaerus. Meanwhile, the opus delicti, to confirm the 1807 academic theory of Seetzen was only discovered in 1965 by his compatriot, August Strobel, through the discovery of the 3.5-km-long circumvallation siege-wall (a twin monument-structure of the circumvallation around Masada, built by the same Legion X Fretensis), with the hilltop ruins within its epicenter. The only Early Roman siege in the Transjordan region was at Machaerus, where the Zealots took refuge. Strobel published his scientific observations in 1968, and the archaeological excavations and explorations started within some months.

The following field works have been conducted since the discovery of Strobel:

6. 2017-: The HAA-SBF joint excavations and surveys of the Machaerus citadel and lower city.
Joint Archaeological Mission of the HAA and the SBF, director: Győző Vörös

Two introductory articles (published here with the official permission of BAR) to the Machaerus archaeological excavations: are attached below.

Photograph above:
Their Royal Highnesses of the Royal Scientific Society of Jordan, Prince El-Hassan bin Talal (Founder and Chairman), and her daughter Princess Sumaya bint El-Hassan (President) are receiving from SBF Research Professor Győző Vörös the MACHAERUS II volume in the Amman Royal Palace of the Kingdom of Jordan.

The first two excavation-final-report academic-monographs on Machaerus were published in the SBF Collectio Maior series Nos. 53 and 55 in 2013 and 2015 in Milan, Edizioni Terra Santa:
Machaerus I
Machaerus II

The archaeological site is a pilgrim destination for Christianity and Islam today, and also an important historical place for Judaism: one of the memorable scenes of the Gospels. The dramatic events in 29 AD on the Golgotha of Saint John the Baptist that memory are encapsulated among the remaining walls of Machaerus, will be celebrated through its bimillennia in 2029.

An introductory lecture to the Machaerus excavations (the 2014 SBF Dies Academicus lecture): 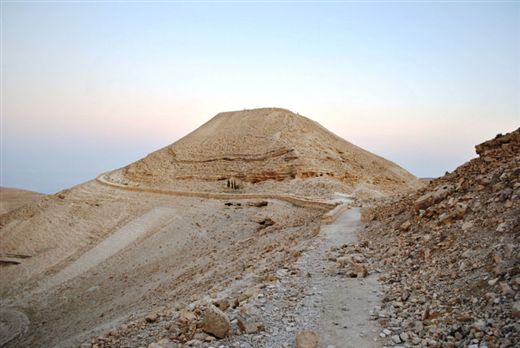 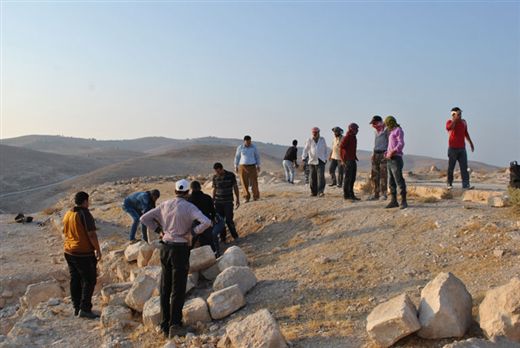 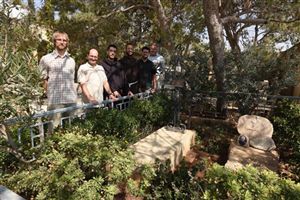